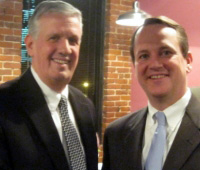 The recent New England Business Brokers Association’s annual meeting, held in Worcester on Feb. 1, featured Massachusetts Lieutenant Governor Timothy P. Murray as speaker. At the meeting, which brought together business brokers, intermediaries, attorneys, accountants, and lenders in Murray’s home town, the lieutenant governor focused on the current administration’s support of the business community and economic development in the state.

Murray began his discussion with a familiar topic for the audience, Small Business Administration guaranteed loans and the Patriot Express Loan Program for Veterans, which helps small business owners. The Lieutenant Governor stated that Massachusetts was the “best state in the country” for programs for veterans and their families. The emphasis was on the Patrick Administration’s efforts to support veterans when they return home from active duty.

The lieutenant governor focused on manufacturing next, noting that from 2006, our state went from 47th to fifth in job creation in the United States, and is now the sixth largest manufacturing employer in the country. Murray pointed to the recapitalization of the MA Growth Capital Corporation as the impetus to assist manufacturers, biotech, and others to obtain financing to continue to grow their business in the future, an example of government partnering with the private sector.

When asked how his administration is helping small business, Murray cited six areas of achievement for the state:

The Lieutenant Governor finished the evening’s discussion highlighting the state’s many strengths. He pointed to the Port of New Bedford as the number one fishing port in the United States, and touted Boston as number one and Worcester number three as the fastest growing major metropolitan areas in the U.S. Boston, Springfield, and Worcester also claimed spots in the Brooking Institute’s top 20 economic recovery areas in the country.

PUBLISHED IN THE SOUTHCOAST BUSINESS BULLETIN ON FEBRUARY 24, 2012